Valorant is an FPS game which is free to play. This game is categorized into a new game because this game was released on June 2nd, 2020. But, on April 7th, 2020, this game began a closed beta with limited access.

In this game, there is a closed beta tournament named 100 Thieves Invitational: Valorant which is hosted by 100 Thieves. You may wonder about the teams of this tournament. According to the Liquipedia, here are the team which participated. 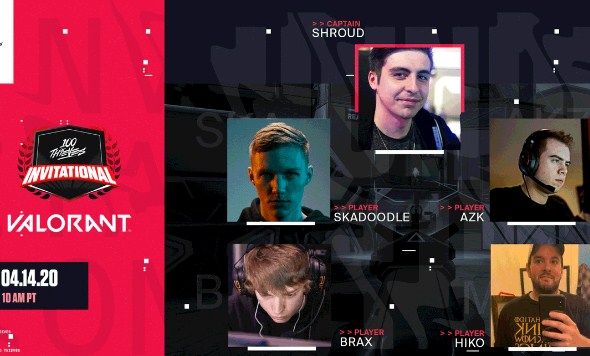 The most participants comes from America which is about 75%. Then, participants from Canada is 11%, from Australia 6%, from New Zealand 3%, from Norway 3%, and from Sweden 3%.

This event could be watched through the channel of each player. Some of the players have Mixer, Twitch, or Youtube channels which fans could join in. You were also able to hop on to 100 Thieves’ Twitch channel for an official broadcast. The participant of this tournament should be streaming during the competition. So, it was a good chance viewers would be able to watch the match through some platforms and perspectives.

This tournament was a little bit more fun than a high end competition. In this event, you could see FPS gods such as Shroud so that you know that this tournament was an event which was worth to watch. Did you know when this event take place? 100 Thieves Invitational event kicked off on Tuesday, April 14th at 10 am PDT (1 pm EDT / 7 pm CEST). This was a one-day event.

Group A includes Team Shroud, Team Timthetatman, Team Courage, and Team Ninja. Group B includes Team Nadeshot, Team Summit, Team Yassuo and Team Drdisrespect. The two teams with the best win-loss record from each group went to the knockout stage. It is a single-elimination bracket. The games are Best of 1 until the final and it is Best of 3.

According to the Liquipedia, here is the prize pool.

Are you interested in watching this kind of tournament? If you miss this kind of tournament, then you do not have to be sad. You are able to watch next tournament if Valorant hold it again. You have to stay up to date about the information about Valorant so that you will not miss any events of Valorant. You are able to access this site often to find new information about Valorant. You can also visit the official site of Valorant or their Twitter account.