Underdogs Ninjas in Pyjamas and Giants Gaming were going to compete for the title, with ZypppanGoKill and BBL Esports looking to find an upset. The tournament was going to take place over 5 days and include a €15,000 (roughly $18,000) prize pool. Here is everything you need to know about the event, including the format, teams, schedule, and streaming options. 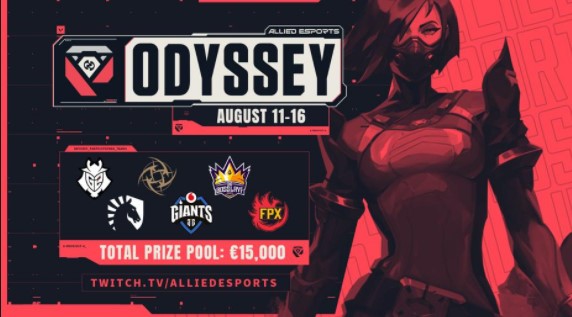 The group stage of Allied Esports Odyssey was going to take place over a four day period from August 11 to 15 at 10:30am CT each day. The tournament would conclude on August 16 with the semifinals and grand finals.

For Allied Esports this event is a chance to really create a name in the Valorant scene as a top tournament organizer. Most of the other Ignition Series events have either been hosted by teams or tournament organizers which have experience putting on massive FPS tournaments. Allied Esports has a strong history, however in recent years it has not hosted too many massive events, the hope is that the company will be able to become a major player in the Valorant scene if the Odyssey event continues to be impressive.

If you need have any question related to Allied Esports Odyssey, you are able to comment in the section below.