As a Valorant player, have you ever heard about Brax? He is one of Valorant players and now he is a T1 player. For you who know him, you may wonder about the settings, crosshair and setup which are used by them in the Valorant game. Here, we will inform you about it.

Braxton Pierce or Brax or formerly known as swag was born on September 20th, 1996. He is a game player from America who now plays for T1. Previously, he was a professional Counter0Strike: Global Offensive player who is most known for his time in compLexity Gaming and iBUYPOWER. Widely, he was considered to be one of the best young talents in America before being one of 7 individuals who were banned permanently from Valve events. On March 9th, 2020, he was signed to T1 as a professional player for Valorant and also content creator for CS:GO. 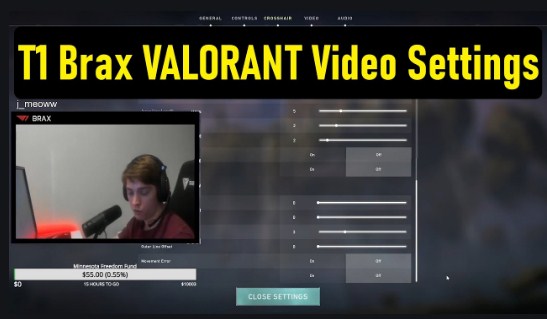 Do you want to know the crosshair, settings and setup which are used by Brax? You are able to see the detail of the information in the list below.

You may also want to know about the Sensitivity and also the Keybinds which are used by Brax on Valorant. Here are the information.

If you want to have the same things such as the settings, setup, crosshair and also the gaming PC which are used by Brax, you are able to do that. You can read the details above and then set yours the same as what Brax has.