For those who are itching for the next big multiplayer shooter, it is very likely that you are interested in Valorant. The online shooter of Riot Games is drawing a massive amount of attention and for a good reason, the creators of League of Legends both have the budget and skills to turn the game into one of the highlights of the genre.

Aside from that, Valorant is a game tailored for esports and streaming, with certain attention to lag issues and cheating that afflict the other shooters. The sooner you get into the game called Valorant the better, but you may be wondering yourself this question: what is the download size of Valorant? 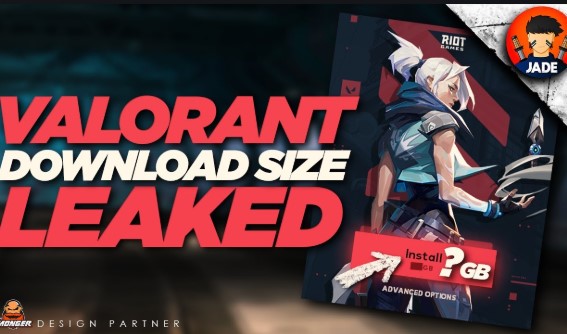 For those who are wondering how many GB is Valorant (download size for PC), currently, you will need around 8GB of free space to download Valorant on your PC. However, you will have to keep in mind that the game is a free live service game, meaning it will probably have a decent amount of large patches and updates on a regular basis. So, you will probably want to free up a bit more space on your device in order to make room for those.

Furthermore, you will not find Valorant of Steam, as it has to be downloaded directly from the official website of Valorant. First of all, you will simply download the install client which is around 65MB. From there, you will have to download Riot Vanguard. This one is a 3.6 GB anti-cheat system that each player must have before they are able to play. Once you have gotten that squared away, you will be able to install the rest of the game files onto your PC, which will bring you to a grand total of somewhere between 7 to 8 GB.

It is important to take a note that this is just the base install size of Valorant and it does not include any kind of day one updates or patches. It is very likely that you will need to use up a few more GBs in the coming days or weeks if you want to continue playing the game, as that is the nature of this gaming genre.

For those who are not aware, the Valorant closed eta came to an end on May 28 and the game was officially launched on June 2. The sad news is that all of the items that the players gained in the closed beta were not carried over to the full game. The only exception is the items earned from the Player Pass.

Currently, the game called Valorant is a PC exclusive and it is not available on Xbox One, PlayStation 4, Nintendo Switch, iOS, or Android. Actually, there have been some rumors that suggest the game could come to the other platforms in the future, but nothing concrete has been announced. For more information about Valorant and the requirements to get it, please visit the official website of Riot Games.