As the Nether Update is still a trend, players of Minecraft are still unpacking all of the new goodies that have been added to the nightmarish hellscape, that is one of the most amazing places in the game called The Nether. The Nether is not new in the Minecraft world, but Soul Speed enchantment certainly is.

Do you know what Soul Speed is and how to get one? Find out the answers by reading the article below.
Soul Speed refers to a new treasure enchantment that came in with the June 23rd release of the expansive and highly anticipated Nether Update. It is able to be applied to boots to provide players a speed buff when walking over Soul Sand or the newly added Soul Soil, the former of which ordinarily slows players down. This one is really useful because of its speed. Before the thing was introduced, players faced a rather inconvenient debuff whenever walking over that blasted Soul Sand. With the new update, players are able to use boots with one of the three levels of Soul Speed enchantment to increase their speed pretty drastically when moving over Soul Sand and Soul Soil. 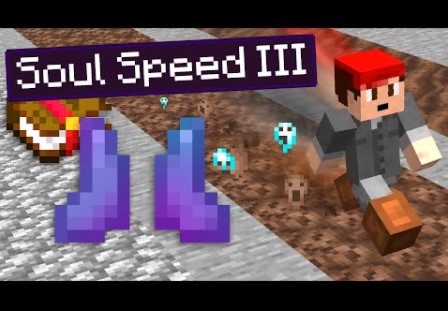 The method the new Nether Update has been implemented is what makes Soul Speed an especially timely, and far from coincidental addition. While the new thing brings a waterfall of new features such as the array of new blocks, mobs, and biomes, each good stuff is able to be only accessed in newly generated chunks of Nether. It means you have to cross to the very outermost reaches of your explored Nether to start seeing the newer goodies. Basically, Soul Speed is more than just a movement speed buff that is great for maneuvering around the Nether without using boats and ice. It is known as a subtle band aid Mojang has given to the players, alongside the Respawn Anchor released earlier this year, in order to help expedite their journey to the new Nether content.

Mojang must have reasons to roll the update out this way, preserving whatever you have built thus far. However, it is annoying to walk all the way to the very edge of Nether as you know it just to begin seeing the new features on offer.

So, what should be done to get the Soul Speed in Minecraft? As the Soul Speed is a treasure enchantment, you cannot acquire it through an Enchantment Table, neither are able to get it from most loot chests or through trading. There is 2% chance of getting it by trading with Piglins, who may drop either a pair of iron boots with the enchanted book. Apart from that, you could also harshly murder them on the off chance they drop a fresh pair of Golden Boots sporting Soul Speed. On top of that, you also have a shot at getting the Enchanted books or a pair of Golden Boots with the enchantment from chests in Bastion Remnants, and through Fishing. In addition, you could always speed things up with a Piglin Farm.