In the game called Minecraft, you are able to make an invisible potion and add it to your inventory. When the potion is drank, it will give you the invisibility effect so that no one is able to see you for a few minutes, such as three or eight minutes. 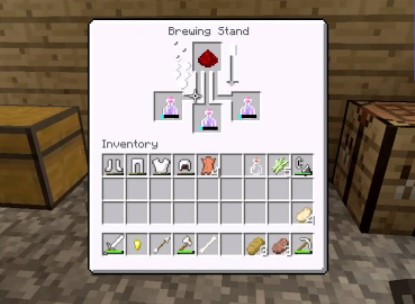 How do you make the invisible potion in Minecraft? In order to make the invisible potion in Minecraft, the first thing that you have to do is to open your brewing stand so that you have the Brewing Stand menu. then, stary by adding blaze powder in the far left box to activate the brewing stand. In the Brewing Stand menu, you need to place the ingredients in the top box and the potions are created in the bottom three boxes. As stated before, you will need 1 potion of night vision (3:00) and 1 fermented spider eye if you want to make a Potion of Invisibility (3:00). Please place the potion of night vision (3:00) in one of the bottom boxes in the Brewing Stand menu and then add the fermented spider eye to the top box. Once the brewing process is done, you will be able to hear a glug glug glug sound and the fermented spider eye will disappear. The thing called the Potion of Invisibility (3:00) will now be finished. It is better for you to hover over the potion in the Brewing Stand so you will be able to see the name of the potion and its effects. In the end, your bottle will not contain a Potion of Invisibility (3:00).