Vindicators are humanoid, hostile, villager-shaped mobs that can be found in the Overworld inside woodland mansions and in raids. Actually, they are one of five types of Illagers (which is an abbreviation for “ill-willing villagers”), the other four being pillager, the illusioner, evoker, and ravager.

Vindicators are illagers equipped with iron axes. The sounds of vindicators like a villager. But, they have more of a grunting tone. They often say “Hurgh,” “Hmph,” and “Har-hum!”

You have to remember that the Vindicators are considered as the Illagers. It means that they are hostile outcasts from the villages. Vindicators look similar to the villagers, except their skin is grey. Besides, their clothing also looks different, and specifically Vindicators have blue eyes. Vindicators spawn in the Over world inside woodland mansions in groups of 1 to 3, depending on the size of the mansion. Sometimes, they are accompanied by an evoker. In the Village and Pillage update, they can accompany Illager patrols and join village raids. 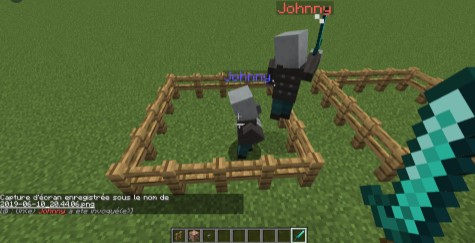 Once a vindicator sees a player, wandering trader, villager, or Iron Golem, it draws an iron axe and charges at the target at a high speed, attacking once in melee range. Vindicator’s iron axe has a chance to be enchanted and scaled with the game’s difficulty level like with other equipment. Even though they are allies with the pillagers, but they are going to attack a pillager that has unintentionally shot them.

The Vindicators deal high damage to lightly armored players. So it is advisable to be wary and equip durable gear once you are fighting them. Even, they are a larger threat when in groups. So, you need to refrain from fighting them all at once. The use of a bow is able to be helpful, but bear in mind that the vindicator which is hit will notice this immediately and will charge at the player. Building barriers will be a good option too, as vindicators are melee mobs, however the player must act fast when building one, as vindicators are quite fast. Also, it is important to keep in mind that since vindicators wield axes, they are able to temporarily disable shields.