The gaming community really appreciates data miners as they usually get accurate leaks on any upcoming changes to the most popular IPs even before the developers of the games reveal anything. When it comes to Valorant, some superstars have been digging into the game ever since the closed beta release. The biggest Valorant leak contributors at the moment are Valorant Leaks, PlayerIGN, and floxay.

Each time there is a new patch, those three set up to dig whatever they can out of the game and reveal some of the plans of Riot for the future. Recently, they found some new elements in the game files after patch 1.01 which hint at a new Agent named Killjoy or Bombshell, whose abilities revolve around the issue of turrets. 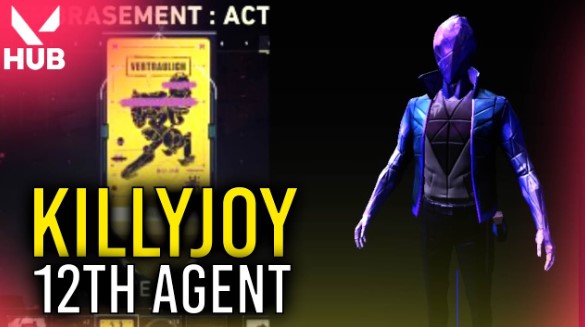 All the speculation about the 12th Agent is hardly surprising. During the closed beta phase, the developer had indicated that the full game would be launched with a total of 12 Agents. However, the 12th one was not ready for the official release of the game on June 2 and the game came out with just 11 of them.

The most interesting part that has caught the attention of the Valorant community is, however, the abilities of the new Agent and their unique nature. PlayerIGN said that the Valorant card is literally called KJ Tease. This one is a teaser for a character codenamed Killjoy and Agent named Bombshell.

It seems like the game mechanic of Killjoy will revolve around the use of gadgets like that of Cypher, but instead of cameras, he will be using turrets. The thing leads to people to believe that unlike Cypher, Killjoy will be a more aggressive Agent, as the turrets might just be more adept at getting frags than gathering opponent information.

During the closed beta time, PlayerIGN had also shared a video about the possible Killjoy ability that uses a drone. The ability, which was known as Nano Storm Bot, might just be one of the many abilities that are able to help the new Agent become an aggressive fragger.

Floxay shared a small video that featured a skeletal animation of what looks like a turret on June 13. However, he did not share any additional information. There is still a speculation whether the player will be able to actively control the turret. As we are yet to get any official information from Riot Games about the new Agent, all that we have to do is to conjecture at this point.

This paragraph consists of the brief information of Killjoy. Killjoy may be known as an offensive yet sneaky character, ruining the joy of the other players by maybe having a loot stealing or credit stealing ability, or maybe powers related to stopping the other abilities of the others characters in their tracks, or not being affected by them. A Valorant leaker called PlayerIGN has recently found evidence of the bot of Killjoy in the files named Nano Storm Bot. He also found the indications that Killjoy is actually named Bombshell.