There is a magical mod for Minecraft that is based on the night sky that helps you harness the power of Constellations to empower your weapons and armor and the world around you. This one was released for the first time in Beta on February 12, 2017 for Minecraft version 1.10.2 by HellFirePvP. The current version is used 1.12.2 – 1.10.11.

Astral Sorcery is mainly focused at night but that does not mean that you are not able to access the progress with the mod during the day. This one is based very much around discovering stuff in the world and does mean that if you are playing on a certain server you will have to be aware of the others who are also trying to progress in the mod. 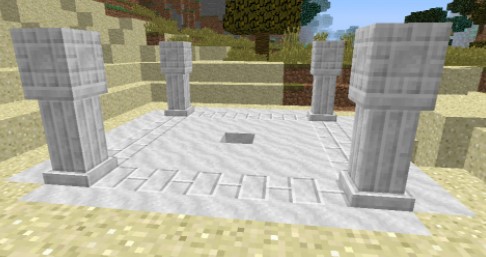 Before you start Astral Sorcery, you are highly recommended to install a mapping mod such as journey map to make tracking a little easier.

Astral Tome is the name of the source of most Astral Sorcery knowledge. By right clicking, you are able to open the tome. The sections of the tome can be navigated by scrolling and dragging within the GUI, and individual topics can be accessed by clicking. Holding Shift and right clicking can open a hidden inventory of the Astral Tome. Only Constellation Paper is able to be stored within this inventory.

Constellations can be described as a key mechanic in Astral Sorcery. As of Minecraft version 1.10.19, there are 16 constellations, in which 5 bright, 7 are dim and 4 are faint. The bright ones are visible to the player and possible to discover from the beginning. They are the only ones a player is able to adapt themselves to, and grant parks upon doing so. The dim ones are only visible after one has attuned themselves to a constellation. Both Rock and Celestial Crystals are able to be attuned to them. The faint ones are only visible to an attuned player using an Observatory. However, they are able to be used to augment the rituals of the other constellations.

Rock Crystals refer to the items that you are able to get from Rock Crystal ore. These kinds of items will not stack as each crystal has a size number, and a purity percentage. It will matter for putting them into a liquid light well and making them into crystal tools.

Aquamarine is the one ore that is usually found in the ocean. It is pretty common and is able to be used to craft a lot of things.

Ancient Shrines are defined as naturally occurring structures generated upon world creation. They provide you with a Floating Crystal, allowing them to access most of the modpack. They spawn in Extreme Hills biomes and are able to be recognized by their large marble exterior. Within the shrine, there is a room with two chests and a Floating Crystal.