Woodland mansions are special structures that are found in dark forests and their hill variants. They are highly anticipated to explore because they are inhabited by Vindicators and evokers, and one of occasions whereby a totem of undying can be earned. This makes Woodland mansions a nice place to go before fighting bosses. 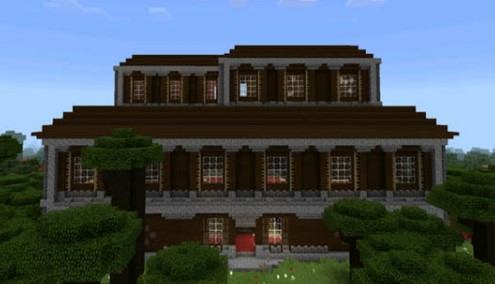 Vindicators are the illagers equipped with iron axes.

On normal and hard difficulty, sometimes the Vindicators spawn with a randomly enchanted iron axe. The chance is 0-25%, with the chance being higher once the regional difficulty is higher.

The Vindicators spawn during the generation of the Mansions inside specific rooms. Several rooms contain 1, others contain 3, some contain 2 accompanied by an Evoker, and some can rarely spawn in the corridors. They do not respawn after initially spawning. Actually, the Vindicators generated with Mansions do not despawn naturally, unless the world is switched to Peaceful difficulty.

Based on the research, Vindicators have 24 HP, slightly higher than most other mobs. However, they hit hard, dealing a total of 19 damage on Hard difficulty. Even, they deal much higher if the axe is enchanted with sharpness. Their fighting style is the most simplistic out of all Illagers, they easily pull out an axe and try to run up to the player and hit them.