After an amazing closed beta run, the game called Valorant underwent a full global release earlier in June. Even in the beta period, it surged the gaming charts and posted astonishing viewership numbers. The great gameplay on offer and unique character designs appealed to the playerbase, adding to the skyrocketing popularity of the 5v5 tactical shooter.

The creator of Valorant, Riot Games, dubbed the first season of Valorant as Episode 1: Ignition and introduced lots of new content and adjustments. They added a new map set in Italy named Ascent, and a new agent known as Reyna, joined the combat roster. Moreover, update 1.0 patched in the new game mode of Valorant and made some tweaks to existing maps, as well as agent abilities. 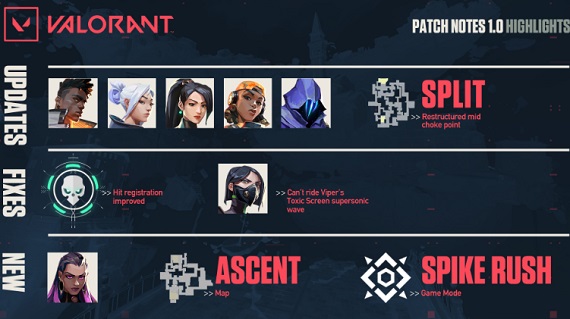 However, the competitive mode of Valorant from the closed beta did not make the cut. It left rank grinders disappointed. Now, they said the ranked mode will soon make its way into the tactical first person shooter, for the first time since full release.

So, when will the next Valorant patch date? Joe Ziegler, the game director of Valorant, treated fans to the great news through a Twitter post. This one confirmed competitive mode will likely return next week but did not specify the date. He said that the team will utilize this week to make sure the ranked mode is fully prepared for a release. In the past, in the patch notes for Update 1.0, the team stated that they would make some important adjustments to ranked Valorant based on player feedback from the closed data version.

Riot Games opted against introducing ranked mode directly into the full game as their main focus was to make it more stable and balanced. Aside from that, they also wanted to provide players with steady servers before initiating competitive matchmaking.

Back in the beta days, Riot Games first let the players get accustomed to and learn the game. only after that time, they allowed ranked play. Similarly, after the official launch of Valorant, they gave the same courtesy to the new players. Since every player has a hand of the tactical gameplay now, the team will eventually re-introduced rated Valorant.

It is such good news for the rank enthusiasts who have eagerly waited for the return of competitive mode of Valorant. There are currently no additional details about how the ranked system will work in the official game, or if it will implement the same method as before.

Apparently, raked mode was removed from Valorant when it was officially released on June 2. In the patch notes for the launch of the accompanying 1.0 update, the developer had noted that the mode would come back a few patches into the launch as the company focused on making sure the service is stable. Since then, they have only released a minor patch, teh 1.01 update on June 10. This one nerfed the agent Sage, whose cast range for her Barrier Orb ability was reduced by half as it had allowed her to aggressively take control of neutral territory in a way that was not right for her role in the game.