Are you curious about the voice behind Raze character in Valorant game? Who do you think? Well, voice actor for Raze character is Carolina Ravassa. She also voiced Overwatch’s hacker Sombra. Besides, she appeared in GTA V, Max Payne 3, Just Cause 4 and other titles. Starring in some TV shows are also done by her. 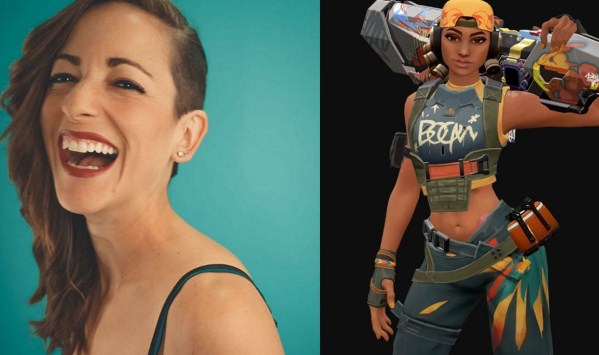 Carolina Ravassa was born on June 15th, 1985. She is a Colombian actress and producer. She is a performing arts graduate from Boston College and New York Conservatory for Dramatic Arts. She grew up in some countries, spending her childhood between Columbia and the US. So, no wonder why she is fluent in 4 languages including Spanish, English, Portuguese and Italian. From a young age, she was interested in acting and her first role was in a local production of The Sound of Music in which she played Gretel.

Now, let’s find out some information about Raze, a character voiced by Carolina Ravassa. In the Valorant game, Raze is an agent who loves explosives. She excels at flushing entrenched enemies and clearing tight spaces with a generous dose of boom with her blunt force trauma playstyle. If we compare to many of the other agents in Valorant, the playstyle of Raze is very aggressive. Mobility and damage are her abilities which are focused on instead of intel gathering or support.

Here are the abilities of Raze in Valorant game.

This is a basic ability which costs 200.

Throw a Blast Pack which will stick to surfaces.

Re-use the ability after deployment to detonate, damaging ad moving anything hit.

This is a basic ability which costs 100.

Fire to throw the grenade which does damage and makes sub-munitions, each doing damage to anyone in their range.

This is a signature ability which costs free for first and then it will cost 200 after it.

Fire will deploy the bot and cause it to travel in a straight line on the ground, bouncing off walls.

This is an ultimate ability which costs 6 points.

Fire shoots a rocket which does massive area damage on contact with anything.

If you want to know other voice actors behind characters in Valorant game, here they are.

What do you think? Are your guess right? So far, you may guess the voice actors behind the characters in this game but you are not sure with your guess. Now, you have known it so hopefully you can sleep well.