The Reaver Collection was known as one of the first bundles made available in the closed beta. This one has a deep purple and gold theme. It showed players that skins will not simply change the colors of the gun, but add more vast cosmetic changes. For instance, the Reaver Vandal and Reaver Operator have significant cosmetic changes when aiming down sight. 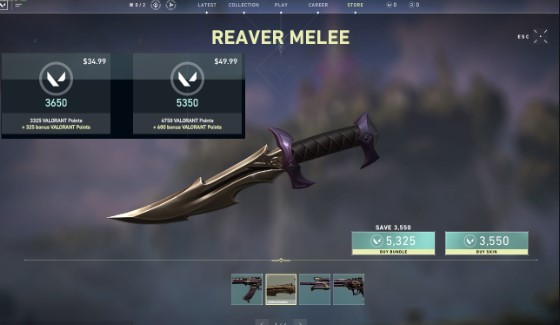 Some people have complained about the price of the Valorant skins. Many of them said that they are too expensive. Actually, there is no doubt that some of the skins are quite expensive. The largest point of contention so far seems to be the Prime Skin bundle. This one includes five skins for 7100 Valorant Points. Different point bundles are available, but usually 1000 Valorant Points cost around $10. It makes the bundle worth at least $70.

It is a lot of money but when you break it down things sound more reasonable. $70 for five skins gives you an average of $14 per skin. If you compare to the cosmetics in the other popular games such as Counter Strike Global Offensive, League of Legends, or Rainbow Six Siege, that seems entirely reasonable. In the Dota 2 world, a lot of people are fine spending $30 on an arcana skin.

Apparently, these skins are available individually, with the bundle giving you a decent saving, but even then prices remain in line with what you would expect to see in the other games. Basically, the high price of the bundle puts people off but they are actually reasonably priced.