In the game by Riot Games called Valorant, the Reaver Collection was referred to as one of the first bundles made available in the closed beta. The theme of it is deep purple and gold. This one showed the players that skins will not simply change the colors of the gun, but add more vast cosmetic changes. For instance, the Reaver Vandal and Reaver Operator have significant cosmetic changes when aiming down sight.

There are four skins included in the Reaver Collection. The first one is the Reaver Knife. This one will always be special because it was the first one to show that melee skins will have different pullout animations. It stays with the reaver theme of big and in your face. The skin is a big golden blade with nice purple handles. The second one is the Reaver Sheriff. This one shows that Riot Games plans to have skins that make heavy modifications to the base model. With a royale purple and gold color scheme and a lot of point edges, the skin brings dome band aids. 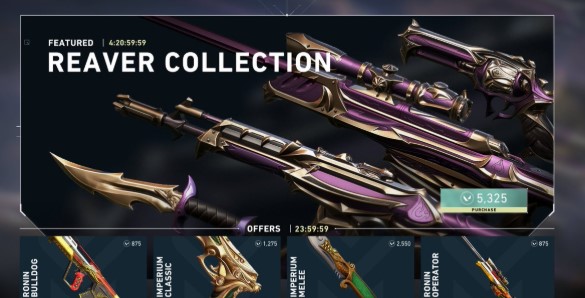 The third one is the Reaver Vandal. This one has a purple and gold theme with tons of fanged edges. There is a special ADS reticle as well as some other special features this skin introduced such as player kill animations. The last one is called the Reaver Operator Level 1. This one has some noticeable changes over the base model. Apparently, the Level 1 matches the purple theme of Reaver while the Level 5 is an evil black and red theme. As for the ADS while zoomed, it is quite different on this beast.

There was a rumor about the Reaver Collection Valorant being removed. When looking at the collection, a user of Reddit called VelikiUcitelj noticed that the Reaver and Prism collection skin was completely removed from the game. Aside from that, the Luxe skins lose their chromas and are now blue only. She or he was aware that we got a lot of new ones that are supposed to be nicer than the beta ones but she or he does not understand why the older ones were removed. In her or his opinion, the Reave skin line was better than anything we got right now.

Another user named SoraKuroi replied that some of them will come back eventually. They might have taken them out of the game in order to give them some more polishing too. Some people thought the Reaver skins looked a bit plastic so maybe they are going to work a bit on the textures.