When you see gameplay of a pro gamer or a streamer, you may be amazed by the settings that they use. So, you also want to use the same settings as them since you also want to have good gameplay. If you have a good setting, it may be able to make you more comfortable playing the game.

What are the Valorant settings of Sinatraa? If you often watch him, you may wonder about it. So, here we will inform you about it. 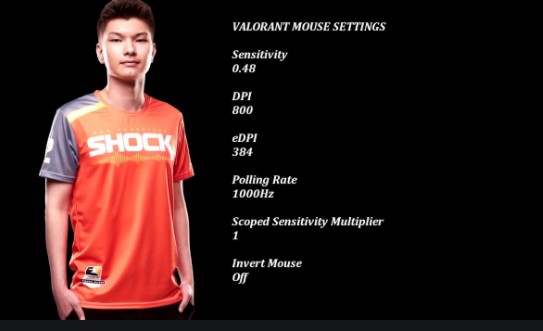 You may also wonder about the Gears that he uses. Here they are.

The Valorant settings of Sinatraa above may change. You are able to apply the settings above in your device. But then, if you always want to have the same settings as Sinatraa, you need to be up to date about this information.

The real name of Sinatraa is Jay Won. He was born on March 18th, 2000. He is an esport player from America and now he is playing for Sentinels in Valorant. Formerly, he was best known as a competitive Overwatch player for the San Fransisco Shock of the Overwatch League (OWL). He was named the league’s most valuable player. In the 2019 season, he won the 2019 Overwatch League Grand Finals. Also, he won the 2019 Overwatch World Cup (OWWC) as a member of Team USA and was also named the 2019 OWWC most valuable player.

When did Sinatraa start loving video games? He started loving video games at a young age specifically with first person shooters such as Call of Duty, Halo 3 and Counter-Strike. On April 28th, 2020, he left professional Overwatch to play Valorant for Sentinels. Sentinels is an American esports organization which is based in Los Angeles which fields teams in Hearthstone, Fortnite, Apex Legends and Valorant. Besides Sinatraa, the active player roster in Sentinels are ShahZaM, SicK, zombs and dapr.