After you finish playing the Valorant game, you automatically will get an Econ Rating, alongside your Average Combat Score and KDA. Then, you probably do not understand to see the score on Icon Rating. But, the Econ Rating definitely shows the ranks and average combat score. 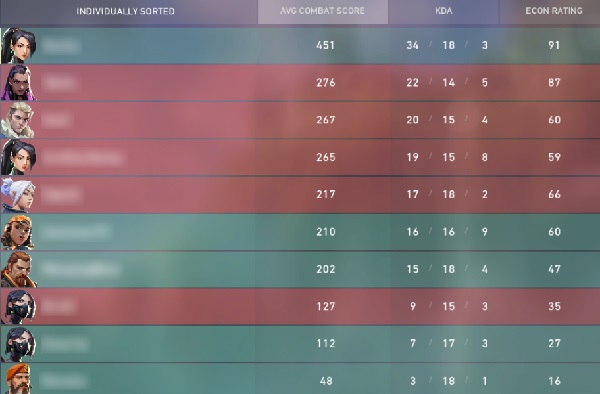 Then, what is Econ Rating? For you who are newcomers to the Valorant game, you may be confused to understand it.

Then, based on the Valorant client, Econ Rating is a stay showing you how much damage you attacked and how many credits you spend in a combat. In this case, it will be calculated as damage dealt per 1,000 Creds spent. Then, the higher the Econ Rating you have, of course, the more damage you did. And, the more bang for your buck you obtained along the way.

In this case, if you are running the enemy team, the player may expect to earn upwards of 100 Econ Rating. Then, in the middle of the pack, the player will linger around 55-75, while the anchoring will get an Econ rating down below 40.

Then, to make you more understanding about the Econ Rating and see the average combat score in a match, definitely you can see them for each match on the example of the scoreboard below!

From the scoreboard, we can conclude that:

How can you use Econ Rating?

After you know the sample of Econ Rating scoreboard, certainly it is so important for you to know how to use the Econ Rating in Valorant.

In this case, Econ Rating as a stat is a bit arbitrary. The Econ Rating will show you a fluctuated score. For example, if you are a good sniper, definitely you must get more kills than someone who is running around with Vandal to get the same Econ Rating.

Unfortunately, if the Econ Rating is low, of course, it can be an indicator as you are wasting Creds by purchasing up on rounds you have to be saving.

So, the Econ Rating works to be an indicator of players’ match score.