If you are new to the game, or you have not seen any gameplay yet, you may be wondering about the skins. Currently, there are no character skins in Valorant. Also, according to Riot, there are no plans for them in the future. But, there are plenty of weapon skins.

Similar with League of Legends, Teamfight Tactics, and Legends of Runrettera, Valorant is free to play. However, Riot could make money. That is where the skin comes in. Here are some skins available to buy in Valorant: 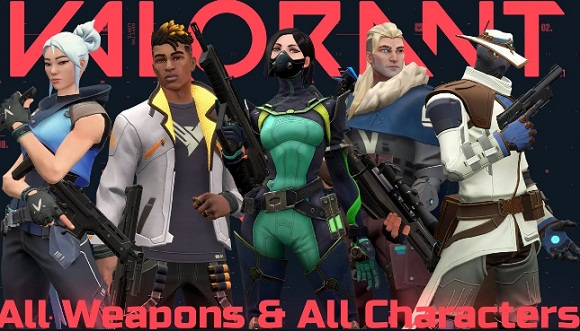 The BP-9 Classic is a sidearm which is a secondary weapon in Valorant. The Classic is the starting pistol which every player gets every round. You have to know that the pistol is fairly weak. However, since the player starts with the weapon, it is able to be used as a starting weapon for rounds where the player does not have enough money to purchase other weapons. Therefore, the player is able to save to purchase a weapon later on in the game. For your information, this BP-9 Classic has low damage, requiring 2-3 shots to the head, 7 to the body, or 8 to the legs to kill.

The SMG-9 Spectre is an SMG which is a primary weapon in Valorant. The Spectre is a moderately-priced submachine gun which occupies its wielder’s primary weapon slot. It is outfitted with a silencer which reduces the range of the weapon’s audio profile.

The SW-ACR Phantom is an assault rifle which is a primary weapon in Valorant. The Phantom is a fully automatic rifle which sits at 2,900 credits. It does less damage per bullet than its counterpart, the Vandal, but creates up for it with its above average accuracy, low spread and a Silencer.

The AR-762 Vandal is an assault rifle which is a primary weapon in Valorant. The Vandal is a fully automatic rifle which sits at 2,900 Credits. It is the counterpart to the Phantom. Also, it is unique for its high DPS at any range. This AR-762 Vandal has an ability to kill the enemies with one shot to the head. Like other rifles, one is able to aim down the sights (ADS) to reduce spread at the cost of fire rate.

The LAR-1887 Marshal is a sniper which is a main weapon in Valorant. The Marshal is a Primary weapon that serves as the cheaper counterpart to the Operator. For your information, this LAR-1887 Marshal has a fast movement speed and high damage per bullet, as well as a cost of 1,100 credits.

The SAR-6 Sheriff is a sidearm which is a secondary weapon in Valorant. For your information, the Sheriff is the most expensive sidearm in the game. It cost 800 Credits. It comes with a small magazine and a high damage, as well as a high recoil. The SAR-6 Sheriff is semi-automatic.

Well, the text above is a list of some weapon skins that are available to buy in Valorant. If you want to buy them, make sure that you have enough credits.