The game called Valorant uses the protected Vanguard anti cheat system by Riot that is capable of detecting players who want to cheat. However, it does not mean you cannot cheat in the game. Apparently, Valorant has a specific section where you are able to run cheat codes. This one is restricted and allows you limited functionality.

The game named Valorant has enabled cheat codes only for Custom Games, meaning you are able to start a custom map and play with your friends using cheats. Some people think cheating is really fun and worth trying out. For your information, some cheats will reduce damage to 0, you are able to use unlimited abilities, and ammo. Do you want to give a try? Please keep in mind that cheat codes are only allowed in the Custom Games. It is under both Open and Closed settings. 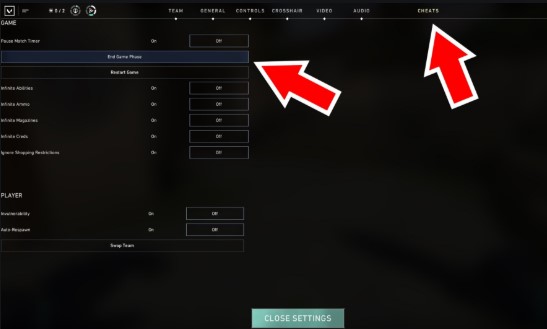 For those who set the game settings as Open the other online players are allowed to join you, while the Closed Games will be restricted to invitations only. In order to turn on cheats in the game, the first thing that you have to do is to do click on Play and then click on Custom Games. Then, click on Close and select the Map. You are able to choose between two modes. The first one is Standard and the second one is Spike Rush. After that, click on the Cheats tab and turn it on.

That is cheats are not on Valorant. You are allowed to use different cheats which will be enabled through a separate menu. Compared to the other games, this game does not have a cheat console where you are able to type cheat codes. It has a whole separate menu for cheats to turn off and on necessary settings.

Basically, there are no special commands to cheat on Valorant. In the Custom Mode, there is ghost mode that allows the player to fly, go under, and clip through certain areas of the map. Aside from that, it also makes players intangible so they cannot be hit by bullets when enabled. It is great for learning different Sova arrows and finding areas on the map that players reach without dying. Players of the game usually die when the cheat is disabled when under, out, or on top of buildings on the map. They are able to use weapons and abilities while in this mode, so shooting opponents from the sky or launching abilities from under the map is possible.

There is also pause match time that is helpful when players want to practice a certain ability over and over again without the game ever switching sides or changing rounds. Auto respawn can be used for the same reason when practicing with a friend so no one has to wait for the round to end to respawn.

As for infinite credits, abilities and magazines are all pretty self explanatory. All of them give players infinite use of their Agent’s abilities, guns, and the ability to buy any gun in the menu.