One of the most exciting things of Valorant that has drawn the attention of players is the variety of skins that players are able to get for the different weapons in the first person shooter. The developer of the game, Riot Games, has already added a plethora of cosmetic items to the closed beta of the title.

There are sure to be a lot of more kinds of these cosmetics ready to be added to the game in the future, which was made clear when the Hypebeast skins bundle was leaked. Nwo, a lot of players are anxiously waiting to see when Hypebeast skins are added to Valorant. The good news is that this page has everything currently known about this particular bundle covered for you. 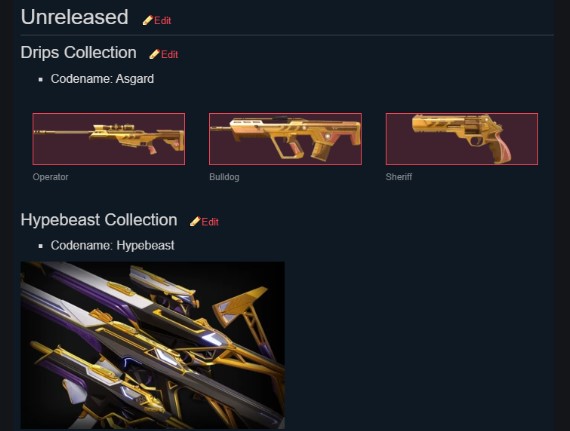 Valorant Hypebeast skins are not currently available in the game and have not been made available in the past for the closed beta of the title. However, the community was made aware of their existence when a member called Santa Ricky leaked the Hypebeast items for the game through a big data mining effort.

The official price of Valorant Hypebeast skins is not known. The previous bundles for the game have cost 4,375 pieces of currency, so it is highly likely that the Valorant Hypebeast skins bundle will cost a similar amount for those who cannot wait to add it to their collections. One of the most interesting things of this bundle is that it includes an ax. It would be the first time that a melee weapon other than a knife has been made available for players to use when playing. It seems like the reason why the developer has classified the knives as melee weapons instead of only saying knives meaning the community could see the other types of melee weapons in the future in addition to the ax in the Hypebeast skins bundle.

It is possible that Valorant Hypebeast skins will not be made available during the closed beta of the game called Valorant and will be put in the in-game store of the title following its official launch in Summer 2020.

There is no doubt that a lot of players of the game will be excited to show off the sleek purple, gold, and black color scheme of the Valorant Hypebeast skins when they are playing and collecting their best highlights. Some people think that Valorant Hypebeast skins are the very best cosmetic items that Riot Games has created for the game so far and will be a massive hit in the community.

So, what are your thoughts on Valorant Hypebeast skins so far? Will you be adding them to your cosmetic item collection when they are made available one day? If you cannot wait for them to be released, then please visit the official website of Riot Games regularly so you could be the first one to know about the release of this bundle. Aside from that, you can also follow all social media accounts of the developer.