Since the release of the rank in the competitive games by Riot Games such as Valorant, a lot of players have been demanding for changes that the system itself has been changed. They are disappointed at how bad the developer of Valorant, Riot Games, is when handling their latest ranked update.

Everyone in the Valorant subreddits and on Twitter has been talking about the competitive matchmaking due to its dynamic queue system. The community has become chaotic especially when the popular streamers like TSM Myth, Hiko, and the Design Director of Valorant named Joe “Ziggs” Ziegler joined in. 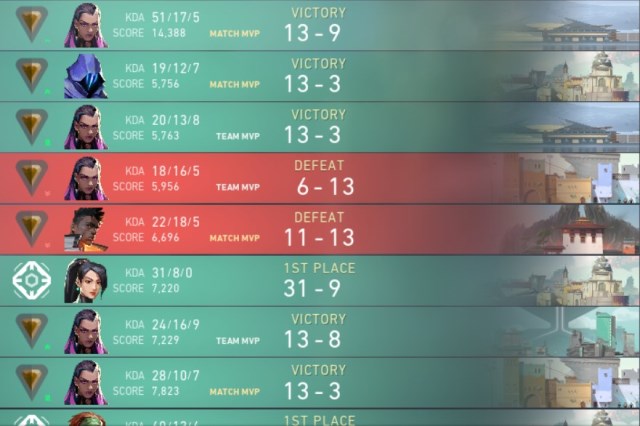 The Valorant Patch Update 2.0 has changed the matchmaking system. This new one makes it hard for the high ranked players to get matched. No one is surprised that the high ranked players need to go through long queues for the Valorant competitive mode as it has always been like this since the beta. There are some players who are included in high rank category. That’s why the queues are long and it can go on for 45 minutes or sometimes even an hour.

Since the newest update of Valorant Patch was released, the top players of the game have been having a hard time facing a very long queue. Tenz, the one who was a professional Valorant player, tweeted that it was 4 hours into his 24 hour stream and he could not get one game on his main sadge. The situation was bad. There was no other option but to play using a new account. The developers of Valorant are putting some effort into preventing smurfers from ruining the game. Unfortunately, this kind of situation leads to smurfing.

The developers are actually aware of the issue. They did not expect this to happen in the competitive mode. They said that they are working on it and the players can expect some changes in the system within the future updates of the game.

Almost everyone is frustrated by the new matchmaking rank placement system and professionals are included. The complaints are mostly about how broken the system has been lately. The rank placements look strange and those who were in the Diamond tier are included in Radiants, which makes the original Radiants frustrated because they are now being matched with the ones in low rank. As stated before, almost everyone is frustrated. Not only the professionals about the high ranked systems but also the ones in the low ranks.

In one of the threads about matchmaking on Reddit, the developer of Valorant talked about the competitive mode as well as hidden MMR. There is also a thread about the system on Twittter made by the content creator of Cloud9, Keeoh. The man suggested the solutions that Riot Games could apply to make the thing better. These solutions include keeping the new radiant or immortal system, but do a hard rank and hidden MMR reset; locking top 500/radiant for the first two weeks so that no one rushes radiant act rank; and maximizing placement D3.

Each solution can actually affect the game. Due to the fact that it has not even a week since Episode 2, it is possible for the developers of Valorant to consider the solutions and to apply them. Furthermore, he explained the skill disparity issue in the words that can be understood by everyone.

In Reddit, there is an overview of the current matchmaking placements that has been given. There is a chance that Valorant is experimenting with different ways with the intention to make the game more competitive. As of now, there is no concrete solution or a real date to fix this thing but it seems there will be one soon.

The ranking system of Valorant currently has a total of eight tiers with Iron at the start and Radiant at the end. The complete Valorant ranks include Iron 1, Iron 2, Iron 3, Bronze 1, Bronze 2, Bronze 3, Silver 1, Silver 2, Silver 3, Gold 1, Gold 2, Gold 3, Platinum 1, Platinum 2, Platinum 3, Diamond 1, Diamond 2, Diamond 3, Immortal, and Radiant. Each one with the exception of Radiant and Immortal has three sub ranks within them, with rank one the lowest and rank three the highest. It means there are 20 ranks in the tactical shooter by Riot if Unranked is excluded.

For your information, the ones who make it to the top 500 in each region will get the Radiant rank and about 1% of the top ones per region will get Immortal rank. For everyone with beta, you must know that the top rank in this game has been renamed to Radiant when it used to be Valorant. The intention of the change is to help reduce potential confusion and to keep things fresh.

In case you have no idea how the ranking system of Valorant works, it works similarly like the other competitive games. Before you have a chance to play ranked, it is needed for you to complete a total of 10 matches. You are able to get on the grid after the mode is available.

When it comes to ranking up in Valorant, the most important thing is winning the games. However, it is different at the beginning while you play your placement matches because the most important is your personal performance. Contrary to the other competitive games, the ranking system of this game also calculates how serious you are to win or lose a match. For everyone who wants to rank up, please do not focus on your KDA. However, it works differently for the ones with the Radiant title. According to Riot Games, they will only take into account how you win and lose your matches. The reason is because it trusts you and your teammates have earned your way there. When you are gone or inactive for 14 years, be ready to have your rank hidden. On the brighter news, it will be back to normal once you have played your first match back.