Reyna is the name of the first Valorant character to be added to the roster since the official launch of the game. This one is a vampire whose abilities feed off of getting kills, allowing Reyna to heal, earn buffs, and even turn invisible.

The playstyle of Reyna is very feast or famine as she only has an ability that does not have to use kills to activate. If she is not getting kills consistently, she will not be able to contribute much to her team if you compare to the other agents. However, when she is rolling, she has more momentum than any other agent and is able to win a round singlehandedly. 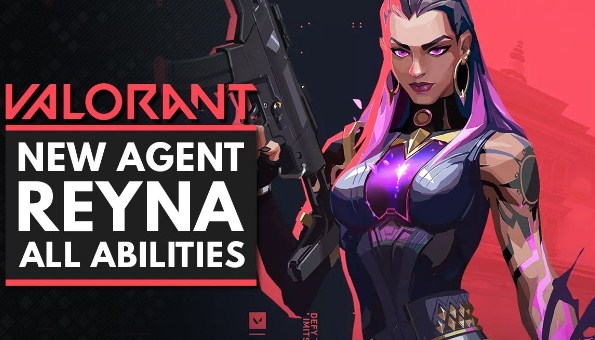 The ability of Reyna

The first one is Leer (C – 200 credits). Most abilities of Reyna focus on empowering herself, however, the one ability that is able to help her team named Leer, is incredibly powerful and versatile. Leer will equip and fire a purple eye (looks like the eye of Sauron) that Nearsights all opponents who see it. Nearsight is the same status effect as Paranoia of Omen. Here you are able to see that because Raze, Brimstone, and Sage are facing the eye, they have the effect over their faces.

Viper is the one on the side of the orb and Jett is facing away so they are unaffected. Their eyes are able to be destroyed. Depending on the gun, it is able to take a few shots, guns like the Operator kill it in a shot. Just like Paranoia, Leer is also able to be fired through walls so make sure to take benefit of that. In general, it is a wonderful tool of offense because your team is unaffected. You can imagine how good the flashbang of Phoenix would be if he did not have to worry about blinding his teammates. On defense, it is able to be used to zone or delay a push or to win a fight when you look to flank.

The second one is Devour (Q – 100 credits, shares resource with E). Devour is known as one of the two abilities that use the Soul Orb mechanic. It means that it cannot be cast until Reyna gets a kill. This one shares charges with Dismiss, the other ability that uses Soul Orbs. Using it casts a self-heal on Reyna that is much faster than the heal of Sage. It can heal throughout its duration and is able to Overheal up to 150 (max health plus 50). You are able to grab Soul Orb from very far away.

The other abilities of Reyna are Dismiss (E – 200 credits, shares resources with Q) and Empress (X – 6 ultimate orbs). Dismiss is the one that requires Soul Orbs. This one works nearly to Devour in terms of the mechanics of getting a kill and collecting an orb. Empress is the ultimate of Reyna. This one buffs her by increasing her firing rate, reload speed, and the speed of switching between guns and abilities.