In the game shop, you are able to buy additional content so that you are able to customize your avatar. The shop of the game works by period. A new pack called ‘collection’ is put every two weeks with skins designed in a common theme. As mentioned earlier that for this week, there is Sovereign series in the shop and you are able to buy them for 7,100 Valorant Points or about 70$. 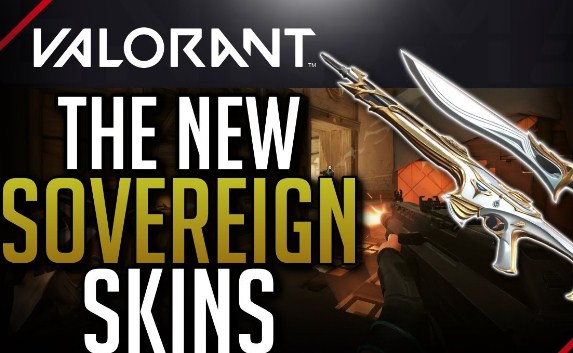 In this pack, you will find five weapon skins including for the Ghost, Stinger, Guardian, Marshall, and Knife. Even a Lucky Charms, a Graffiti and a Map compete the collection. You are able to buy each of them separately. Sovereign Spray is the cheapest and it costs you 325 Valorant Points which is less than $5. The most expensive skin in the collection is the Sovereign Melee which count a little less than $30.

These Sovereign skins were revealed on Tuesday in Valorant Patch 1.01. This patch is a light update to adjust some of the performance of the game which have been noticed since its release. Also, it brings improvements to high-end specs, a nerf on Sage and new orb types in Spike Rush.

The Sovereign skins are gold and silver with a fantasy and majestic theme. With the Guardian and Marshal weapon, the barrel of the gun is black. There are also blue gems which are able to be changed with in-store purchases. The variants are also green and gold, black and silver and purple. VFX and Finisher variants are also had by the skin. In the special Finisher, there will be a giant sword fall from the sky, almost like the ultimate of Garen from League of Legends. If you buy using 10 Radiante points on the melee weapon, you are also able to upgrade the melee weapon to be able to glow during games.

For your information, Valorant is released in chosen countries all over the world including the United States of America, South Korea, Russia and Brazil. What do you think about this skins? Are you interested in buying them? If you want to have the Sovereign skin, then you are able to buy it.