As we all know that Valorant is a new game. It was fully released on June 2nd, 2020 and a lot of people are enthusiastic with this game. You may be one of players who also enthusiastic with it. So, some players also want to know about the Valorant stat tracker. Where can we find it? 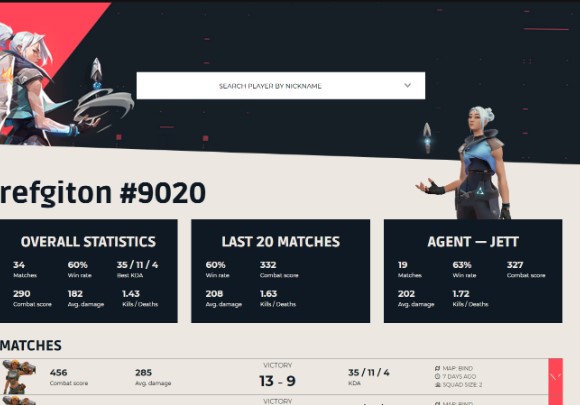 However, because the game is new it makes the information about Valorant stats in these site is still not complete. Even on some sites such as Player Auctions, the stats is coming soon. Soon, you will be able to use these sites to collect information on your gameplay across all of the Valorant maps. You are able to view which Valorant agents which are your strongest and weakness. And it will include the information about the weapons in Valorant which you dominate in the game. In addition, you can find which abilities of Valorant agents which you should use in the game. There will also be Valorant charts which can be used to compare yourself with your friends, and you can see who comes out on top.

Valorant Tracker which can be accessed at valoranttracker.org, there you will be able to find top Valorant player and track their stats on the leaderboards. You can also check settings and hardware that are used by the Valorant pro players such as video card, RAM, mouse, processor, keyboard, headset and monitor. This site will track all statistics by using Riot API. So, you will get the data which is up to date. They will provide information which is detail about all metrics such as kill/ death, rank, score, win rate, and time played.

But, when we tried to access TRN at tracker.gg, we were able to find the Valorant stats. We tried to click on a profile named kaikai and then we were given some information about the player including the play time, matches, damage per round, K/D ratio, kills, win, most kills, losses, deaths, current win streak, longest win streak, assists, attack, attacker kills, defense, defense kills, and some other information. In that site, there is also information about recent matches, the last 7 matches and the top agent.