You have to ensure that your PC is up to speed to play Riot Games’ Valorant. Here are the official hardware requirements and recommendations for 30 fps, 60 fps, and 144+ fps gameplay. We are all insanely excited to play Valorant when it launches later this year. Here is what Riot Games requires and recommends for it to run it smoothly.

As with all competitive first-person shooters, the system requirements are a fair bit more forgiving than your classic title. Before you are able to start playing Valorant, you need to ensure that you have the required specs to run the game. Here are the required specs for Valorant: 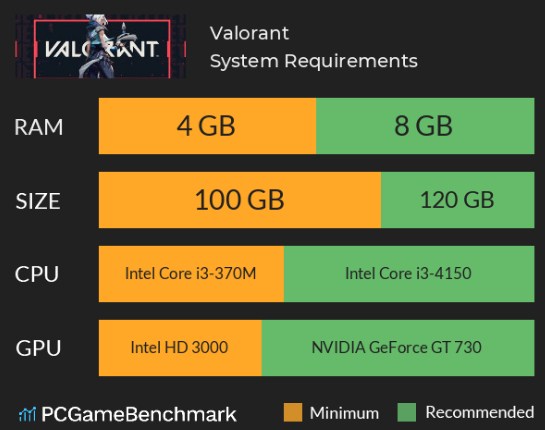 Thanks to Valorant being compatible with Windows 7, it has the ability to run on a wider variety of PC. Also, it means that, if you have the minimum specifications for Valorant, it is going to run at a 30 FPS. Here are the minimum (30 fps):

The highest performance that available for Valorant is 144+ FPS. To achieve this, you need the following specifications. Here are the high-end (144+ fps):

With this setup, you will be able to run Valorant at a smooth 144+ FPS that is recommended for competitive play.

WHAT IS THE VALORANT INSTALL SIZE?

Now, you may want to know the Valorant install size. For your information, the size of the download file for Valorant is only 7.3GB. It is quite small in comparison to the file size of lots of the modern day PC games. Like most online multiplayer games such as Fortnite, CS:GO, and PUBG, Valorant is also free to play. For now, the game is available only on Windows PC. But, reports suggest the game can come to Nintendo Switch, Xbox One, and PS4. You will be able to find the game on playvalorant.com. So, you will not find it on Steam or Epic Games store. Valorant is a tactical shooting game involving two teams with five players in each team. Every player can sign in and play remotely from anywhere in the world. Every game has 25 rounds and the team that wins 13 of them first wins the game. You will be able to select their in-game characters named agents at the start of the game. Also, you are able to purchase abilities and weapons at the start of the game.