Who is Sabine Valorant

Who is Sabine in Valorant? You also probably do not know yet who sabine is. Of course, if you are looking for anything about Sabine on the internet, you will be directed into the information explaining a character in Valorant who has a unique visual look. Is it true?

In fact, Valorant would be giving a new hero with vampiric ability. Until now, there is no official announcement  from Riot Games for the name of the hero. But, the leaked news confirms that a new hero on Haven map, possibility is Sabine.

Of course, the players are waiting for the hero which will appear on Haven map. After the end of the closed beta on the 28th May 2020, Riot Games have been working to hype up for new Valorant Agent/Hero which may release as fast as possible. 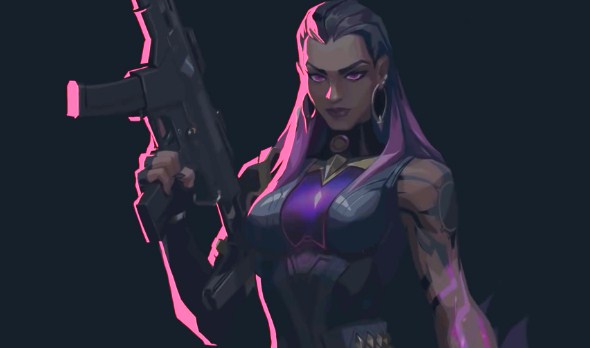 Not only shared on blogpost for upcoming changes in the game, but they also released lots of teaser trailers that show little glimpse of what is yet to come.

It seems that Valorant has a lot in store and fans in the upcoming weeks from a new map to even teasing a new game mode. But, in this chance, we are talking about a new Valorant agent known as a hero that will appear soon. Certainly, a new Valorant hero will show some of the great skill as a part of Valorant Agent.

Formerly, this new agent is teased in the blog post concluded with the view of a foot jutting out beside Sage. But, many Valorant fans are speculating that a new Valorant agent is Sabine or Reyna. Of course, it is a very high possibility at all.

Then, who is Sabine and how does she look?

Sabine can be mentioned as one of Valorant agent in-game voice lines of the existing agents in Valorant. Sabine or Reyna looks as purple as Jett looks blue. She has purple hair and eyes along with possessing some distinct features. She definitely presents to give her quite a unique aura. Then, it sets her apart from the rest of the Valorant Agents so far.

Riot relieved that Sabine will potentially be a little spicy which is going to make the people so amazed with its existence in Valorant.

Although there is no official announcement about her for a new Valorant agent, many people speculate that Sabine may have a vampire look with life stealing abilities. Of course, if it is totally the case, we have unique and different valorant Agents on our hands with some insane round clutching potential.

So, it is so normal if every Valorant player really waits for her coming.

In addition, Valorant has launched into closed beta with 10 agents. Then, during the play session, there were only eight agents. In this case, Valorant on purpose kept the momentum of adding new agents as they stated that a total of four maps and 12 agents will appear at Valorant’s full launch.

Well, that’s why Valorant does not leak for a new Valorant agent  which will be available in Haven map.

Leave a reply "Who is Sabine Valorant" Cancel reply